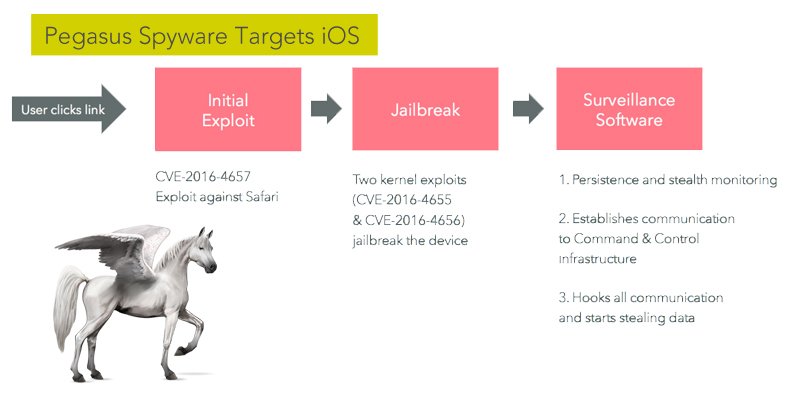 One of the world’s most dangerous Android and iPhone spyware program has been found deployed against targets across 45 countries around the world over the last two years, a new report from Citizen Lab revealed.

The infamous spyware, dubbed Pegasus, is developed by NSO Group—an Israeli company which is mostly known for selling high-tech surveillance tools capable of remotely cracking into iPhones and Android devices to intelligence agencies around the world.

Pegasus is NSO Group’s most powerful creation that has been designed to hack iPhone, Android, and other mobile devices remotely, allowing an attacker to access an incredible amount of data on a target victim, including text messages, calendar entries, emails, WhatsApp messages, user’s location, microphone, and camera—all without the victim’s knowledge.

Pegasus has previously been used to target human rights activists and journalists, from Mexico to the United Arab Emirates.

Now, a new report released Tuesday from the University of Toronto’s Citizen Lab revealed that the Pegasus infections have victimized more countries than previously believed.

Citizen Lab last month said that it had so far counted as many as 174 publicly-reported cases of individuals worldwide “abusively targeted” with NSO spyware, but now found traces of Pegasus infections across as many as 45 countries.

According to the report, 36 Pegasus operators have been using the spyware to conduct surveillance operations in 45 countries worldwide, and at least 10 of these operators appear to be actively engaged in cross-border surveillance.

The report further said that while some NSO customers may be lawfully using Pegasus, at least 6 of those countries with significant Pegasus operations were “known spyware abusers,” which means they have previously been linked to the abusive use of spyware to target civil society.
Just last month, The Hacker News reported that this nasty spyware was used against one of the staffers of Amnesty International—one of the most prominent non-profit human rights organizations in the world—earlier this year, alongside another human rights defender. Since Citizen Lab tracked down Pegasus infections by creating fingerprints for Pegasus infrastructure to identify the IP addresses associated with the same spyware system, it admitted that there could be some inaccuracies in its report, due to the possible use of VPN and satellite connections by some of its targets.

Citizen Lab is keeping those fingerprints secret for now but found they could then be detected by scanning the internet.

In response to the Citizen Lab report, an NSO Group spokesperson released a statement saying that the company worked in full compliance with all countries without breaking any laws, including export control regulations.

“Contrary to statements made by you, our product is licensed to government and law enforcement agencies for the sole purpose of investigating and preventing crime and terror. Our business is conducted in strict compliance with applicable export control laws,” NSO Group spokesperson Shalev Hulio told Citizen Lab.

“NSO’s Business Ethics Committee, which includes outside experts from various disciplines, including law and foreign relations, reviews and approves each transaction and is authorized to reject agreements or cancel existing agreements where there is a case of improper use.”

The NSO Group further said that there were some problems with the Citizen Lab research and that the company did not sell in many of the 45 countries listed in the report.

Technology Enthusiast with a keen eye on the Cyber-security and other tech related developments.
@gopu0000
Previous Twitter API Flaw Exposed Users Messages to Wrong Developers For Over a Year
Next Facebook Hacked — 10 Important Updates You Need To Know About